Dosłownie przytoczony fragment  e-maila  otrzymanego ok dwóch miesiecy temu ..........
"In my wildest dreams I did not expected that USA will see disintegration from inside. Started with stupid intelligentsia in colleges.
My wife does not feel safe but I do. Expect that it will pass. I spent my life saving lives but if my family lives are threatened the guns will talk.
Concerned that future for our children and grand children does not look good. Unfortunately they are not comprehending this reality.
As I see it. The future depends on which of this two countries will prevail: USA or China. Western democracy or communism. It is less of ideology of communism which is just the smoke screen for totalitarianism.
Surpassingly many and I am afraid possibly even majority of voters in USA do not realize it. It may end up with their grandchildren having Chinese boss forcing them to worship: Mao, Marx, Lenin and the like.
So many have not a clue of the global situation. Without USA Putin can have Europe and part of Middle-east and Chine the rest.
It was obvious what Hitler was planning and same with Lenin but many refused to pay attention to it. Many intelligent, and good meaning people had a chance to prevent WW 2 but refused to see the reality. Over 50 to 78,000,000 people paid the price.
Protection by police? In Portland like in all of USA police is not obliged to protect you nor your property. Obliged morale but not by law. In many places with the riots now and the cut in funding they will not be able to. Taxes those have to be paid but those that pay taxes have no control of how the money is spent. 50% of people in USA do not pay a dime but they vote to tax more those who pay. We already see 50 to 150% in crime including murder.
Those are the dividends  the protesters are giving us: The black man with sign supporting Trump executed in Milwaukee, the black man shoot when protecting a store and he was unarmed. More children murdered in Chicago and the higher count of black man shoot in Chicago and other towns. But of course they do not count as those are the other black lives that do not matter. This subject is a taboo to most news outlets. Also 3 police officers blinded in Portland. Censorship at its best."
Jeszcze jeden,  też b ciekawy  o klimacie , o polityce i o demokracji versus totalitaryzm.............
" At the end of this discussion about climate change is good example of how “scientists” become emotional and go beyond  logical arguments. Instead they go for adjectives.
And title like skepticism about skeptics tells a lot. I do not pretend to have the answer but I am skeptics about all of the computer modeling and the “extensive records "that they have.
Record that are extensive and go back for 500,000 years?  If you want to have a grant for your study do more computer modeling that attacks the skeptics.
We all know that computer modeling follows the obvious: garbage in = garbage out. In addition to so called evidence the models include assumptions.
Regardless of who is right lets not overlook that if humans are responsible, than overpopulation is the main problem. If we had only 2 billions of people living on earth we would have
much less problems and that not only with the climate. We will get off the fossil fuels because of the expense. Cars, heating, cooling and most of the activity requiring energy,
in the future will run on hydrogen via energy cell. It will be less  expensive and it will as byproducts produce clean water. Let's hope that we will not kill each other before this time.
The immediate threat to humanity as I see it is the appearance of "bipolar world”. This becomes obvious looking at the economical and military power and how it relates to governance.
On one side is democracy with capitalism and people living free. Mostly free expression, movement,  and economic freedom. Not perfect but in contrast to the other side.
The other side is represented by totalitarianism with limited freedom. On one side people have all the power and the government has only the power delegated to it.
That how it suppose to be but it is being eroded.
On the other side the government has all the power and people have only what the government allows them to have. So on one side the western democracy model with USA as the pillar of freedom.
On the other side China and Russia + few other. But in really it is USA vis China. If USA becomes weak than democracy on earth may crumble. The result could be one totalitarian regime,
established for the whole earth by China. Let's hope that China will fracture and that demise of democracy will not happen.
From climate change to politics. Quite a drift. This because I am increasingly concerned that democratic win in November will weaken USA and will start the decline leading to
unipolar totalitarian regime for all.  Pray for me to be wrong. Nothing can make me happier! I want my children and grand children to live free and in clean environment.
That in turn brings me to other aspect of our environment. Pollution. It also is proportional to human population=overpopulation. We are creating dangerous chemicals.
In the past the least concerned with this was USSR and now China. If someone thinks that democratic win and increasing control over industry will be beneficial to us,
remember that it will be also a win for the worst offenders."
Kategoria: Świat
Tagi: #usa #świat #demokracja #titalitaryzm #klimat #etc 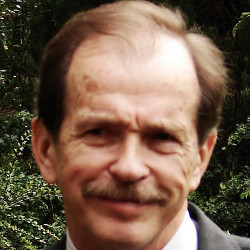