«Elections to the State Duma» and the Aggressor’s «Personnel Policy»

The current three-day show of “elections to the State Duma”, which Russian invaders are now holding in the Crimea, has already received legal and political assessments, decisively everyone has spoken out – from the French Foreign Ministry to the Verkhovna Rada and the Secretary of the National Security and Defense Council of Ukraine. Therefore, it remains to investigate the purely practical circumstances of this action, the very “valuable personnel” and “democratic mechanisms” that authoritative medical workers of regional hospitals from Serbia and Venezuela have come to borrow. Seriously, this is where such a “powerful team of international observers” has worked. The main specificity of such “parliamentary elections – 2021”, which significantly distinguishes them from the “previous series”, is the aggressor’s deep immersion in Orwell. Since now the question is not being raised in the obvious “results”, but in the mass character of the phenomenon, within which the procedure of “expression of will” is increasingly reminiscent of the Soviet one, but rather the modern communist Chinese one. 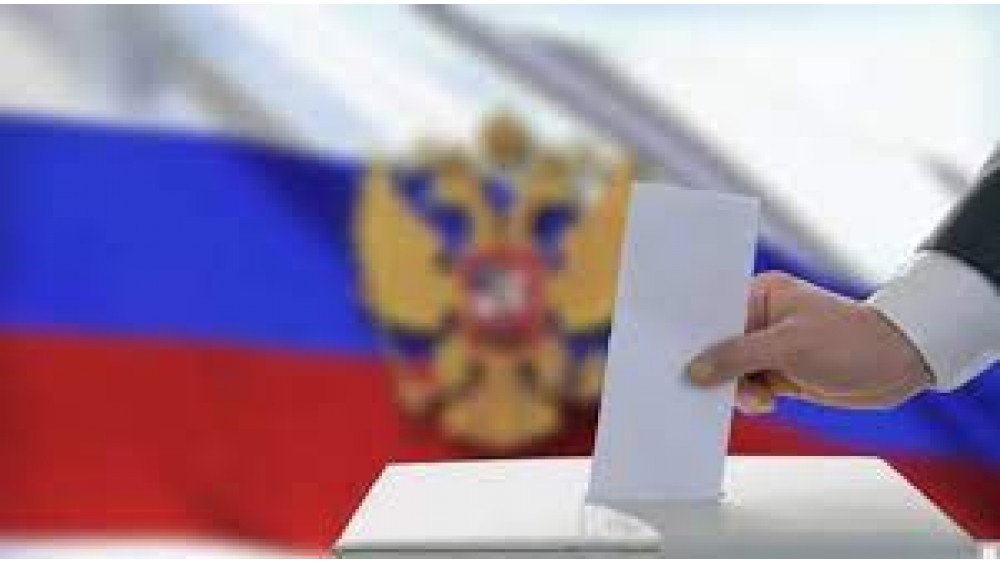 This is due to the fact that the “elections” should demonstrate not only the “sky-high result” of the Shoigu-Lavrov party, where the task is to “hand over to the bins” at least 70% for Crimea, and the numbers above 85% will be considered worthy of encouragement for “jugglers and artists of election commissions”. But the “voter turnout” should also be drawn at 70 %. For the “elections” of 2016, the Russian invaders recklessly focused exclusively on the traditional stuffing and drawing of “protocols” as it happens in Russia itself and got a problem when the Crimean residents, who did not reach, even “voluntarily and compulsorily”, the “polling stations” at all. This issue is now being “successfully resolved” through “electronic voting” and through a three-day “election marathon”, when, for example, on Friday, September 17, the employers “answered with their heads” for the “voting” of their workers.

In addition, the “elections of 2021” are distinguished by the “massive participation of candidates”, when, with the obvious total drawing of “the victory of Putin’s party”, as many as 12 “political forces” are involved in the process. It should be added that this time the “mixed model” presupposes both four “majority constituencies” and “regional parties’ lists”, which were formed by all “Russian political parties” for the peninsula. Including all kinds of “democratic” ones. Of course, none of these “lists” will reach any “parliaments”, but the analysis of this “political crowd” (more than a hundred “candidates for deputies” in total) has become interesting from the point of view of the Russian invaders’ “sociology of elites”. Of course, a significant part of such “lists of opposition’s forces” is made up of completely random personalities, and at the same time, the number of non-Crimeans is, for obvious reasons, very high there.

But it is extremely noteworthy that from this hundreds of future persons, involved in the sanctions list, it was possible to find as many as three Crimean Tatars, and one of these “candidates”, a communist and a former functionary of the village council in Primorsky Tair Abduvaliev, leader of the “Crimean list” of the “Communists of Russia”, goes to “elections” from the better world, since he died in August, 2021. Another completely impassable “regional list” of the “Growth Party” is headed by Girey Bekirov, an extremely interesting character, specializing in the international trade in titanium dioxide and head of the “Association of Entrepreneurs of the Republic of Crimea and the City of Sevastopol”. And Emil Arpatli, the top person of the “Crimean list” of the “Rodina” party, the driver and brother of the whole “Deputy Minister of Industrial Policy”, would have at least a virtual chance of getting a “mandate from the master’s shoulder”. He would, if his “elections” were in Russia itself, have a little chance, as their minority passing scores are sometimes drawn for “Rodina”. For the Crimea, Arpatly, who has already “volunteered as a candidate” several times on behalf of his brother in various “elections”, has absolutely zero chances, of course.

I deliberately dwell on all the identified Crimean Tatar “candidates” in order to highlight the “new Crimean normality” – Crimean Tatars, even collaborators, now are nor recognised by the Russian invaders even for the “government offices”` decorations. Of course, the Crimean Tatars, in particular those few “friends of the Kremlin” who flirted with the Russian special services for eight years, are not on the “lists” of the “United Russia”, or even on the “Republican and Sevastopol city election commissions”. And therefore, instead of analyzing who is not there, it is worth going over who is there.

Let me remind you that both in Russia itself, and especially in the Crimea, occupied by it, the status of a “State Duma’s Deputy” is something extremely divorced from “real governing powers”, and the key task of the “deputies” is not so much to participate in the governing processes, but to play his role as a highly paid statistician, since the Russian parliament, as everyone knows, is not a place for debates.

I will add that one of the factors that made Natalia Poklonskaya and Ruslan Balbek “toxic” for the Russian top-authorities, was that these characters, “elected deputies” in 2016, were brought into the Duma for purely propaganda purposes, buth they took their “mandate” seriously as a form of “participation in the Crimean politics” and tried with him “to solve administrative issues in the region”. It is characteristic that even the “majoritarian deputies” in this model have become very detached from their “constituency” and have practically zero “governing powers” there. Who does not believe me – let them appreciate the “map of the constituencies of the peninsula” from which everything becomes clear. After all, the Russian leaders “formed the constituencies” in such a way that every “constituency” does not have any signs of any integral territory. For example, all three existing “19th, 20th and 21st State Duma constituencies of the Republic of Crimea” received a piece of the center of the region, Simferopol and a “prefabricated hodgepodge” from the peninsula’s various territories. It is practically unrealistic to try to “help voters” in such a “constituency” or to “be remembered by voters” in it. And in this system this is not necessary for Russia’s supreme powers, since there is no real connection between the “voter and the deputy” in its system of coordinates; such connection not only does not exist, but should not exist, even for those, who are completely loyal to the regime.

Through the Crimea-located “majority constituencies” a “mandate” will be drawn to the current “State Duma deputy”, the former head of the “Krymskaya Pravda” newspaper, a member of the “Party of Regions” and “Crimean State Council’s deputy” Konstantin Bakharev. Two other “majoritarian members” will be new, they are Aleksey Chernyak, while a “Crimean State Council’s deputy”, and in the past, a long-term functionary of the AR Crimea’s Verkhovna Rada, and Leonid Babashov, also a “Crimean State Council’s deputy” so far, who was “engaged in business” until 2014. These personalities have become a traditional “compromise” between the two “best friends” from the “Crimean leadership”, Aksyonov and Konstantinov, and their role in the “Russia’s authorities” will be primarily ritual. They are delegated there by the “high contracting parties” of the Crimean criminal and corruption junta purely on the principle “so don’t get to a competitor”.

Tatiana Lobach, who by 2014 built a career in the “Party of Regions” at the level of the Balaklava regional administering, will receive the mandate in the single Sevastopol-located “majority constituency”. Now Lobach “heads” the Sevastopol “faction” of the “Putin’s party” and her ritual “elevation” to a new level of fake is similar to the situation of Chernyak and Babashov.

In comparison with the “majority constituencies”, the situation with the Crimean-Sevastopol common “regional party list” of the “United Russia” became very interesting, oddly enough. This list was traditionally “headed” by the “head of the Crimea” Aksyonov and by the “governor of Sevastopol” Razvozhaev for the corresponding show. Obviously, these “younger brothers” of Shoigu-Lavrov will not receive any “mandate” following the results of the “sowing campaign” and will hand it over “further along the line”.

At the same time, as it was indicated above, the peninsula as a “gray zone”, with no real political life, with a clear division into Crimean residents and Russian colonialists, and with the absence of any uncontrolled media and observers, was elected by the Russian authorities to maximize the “votes’ cheating”. And it among other things gives the “Crimean regional list” of “United Russia” great chances to become “a powerful source of mandates”. Now there are eight positions in this list, where the next number, besides two indicated “godfathers”, is Mikhail Sheremet, Aksyonov’s accomplice from “Russian Unity” and the “commander of the Crimean paramilitaries” in 2014. The next “horseman of the Apocalypse” is Leonid Ivlev, who in 2014-2015 was delegated to the Crimea by the aggressor State to “organize elections” as the “chairman of the Crimean Election Commission”. Now, obviously, Mr. Ivlev wants to “retire” at the Duma sinecure.

The fifth number is recorded by the Sevastopol “Party of Regions” former activist Dmitry Belik, who is now listed as a “deputy of the State Duma”. If the “mathematical and artistic appetites” of the “election commissions” of the peninsula will be “at an agreed indicator,” then these three “list-members” will likely “enter the Duma”. But if the appetites of the Russia-controlled “electoral masters of illusions” will reach more than 70% for “United Russia”, then the “risk zone”, namely the “seventh” Larisa Melnik and the “eighth” Georgiy Muradov, can also receive their “mandates”.

These personalities are so controversial that their “fight for the mandate” deserves a double popcorn. Indeed, for Mrs. Melnik the “chair in the State Duma” becomes an unique “gift of fate”, as for the current head of the “Sevastopol branch” of the “All-Russia People’s Front”, as for a lifelong “public activist”, as for the activist of Victor Medvedchuk’s “Ukrainian Choice” on the eve of the occupation, for a defendant in scandals with her fake education at the Kiev State University in 1989, and for her as the obvious inexpensive protege of all the special services, who did work in the hero-city since 1992. At the same time, for the professional Soviet and Russian high-level security officer Muradov, who since 2014 has been striving to get in Russia the role of “the main one in the issue of international recognition of the Russian Crimea”, the prospect is now getting the role of the “senior Crimean Duma doll”, which was previously supposed to be played by “magic duet” of Ruslan Belbek and Natalia Poklonskaya, becomes an outright mockery. Worse than which can be only one thing – to remain altogether and without this “Duma mandate”, and more, in favor of Mrs. Melnik, which “came from nowhere at the last moment”.

Although here everything is clear with the “source of personnel” and the “ARC” experts have already written about the competition between groups of Russian special assignments in the development of funds from the “federal order” for “international recognition” of the attempted annexation. But since “everything is still bad” for Mr. Muradov with this issue, his competitors are now successfully hooking him up, and it is no coincidence that Mrs. Melnik herself in 2021 does not crawl out of Russian propaganda, in particular, with stories about the “collapse of the ‘Crimean platform’ in Kiev”. So it remains to be guessed whether Mrs. Melnik in the Duma will not let down the one who convincingly advised her now to be included in the list. And let’s see who exactly will get their “prizes” in the Duma from the “head of Crimea” and the “governor of Sevastopol”, because there is not a completely automatic transition of those “magic wands”. Therefore, the “holiday of democracy” of Orwell’s “Animal Farm of Reptiles”, continues in the Russia-captured Crimea.