Kremlin’s plan to “save” Italy, or a tombstone for another EU member state 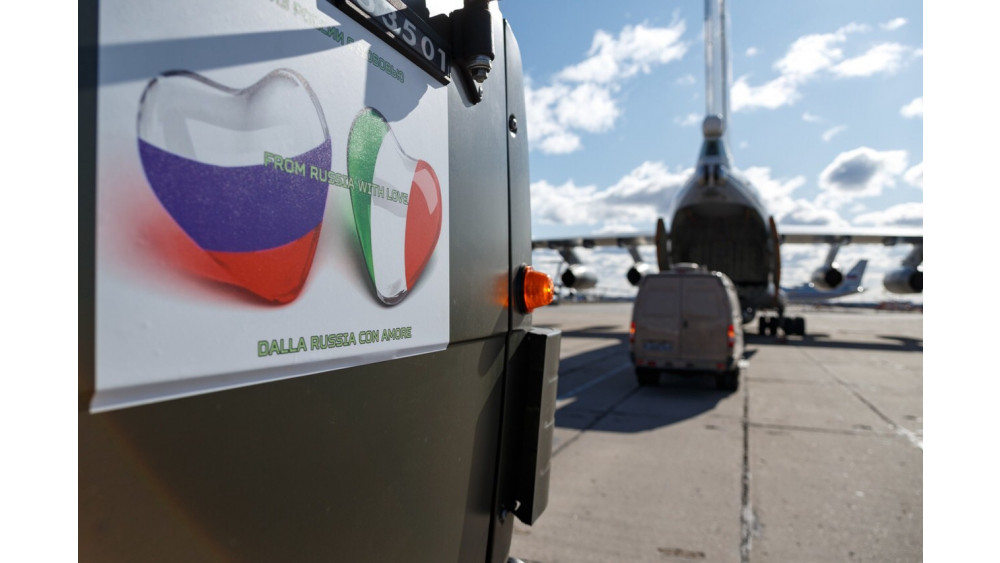 As we know, Russia recently sent its aid to Italy, the country suffering from a raging coronavirus. The move raised plenty of questions — regarding the appropriateness of this “aid”, which won’t be critical in the fight against Covid-19, as well as the moral aspect, given the concealment of the epidemic in Russia, where experts and equipment, now deployed to a distant NATO Ally, would be of a much greater benefit.

The provision of assistance for Italy, at first glance, seemed to be solving for the Kremlin its three strategic, geopolitical, and internal tasks. The first is to show the whole world how Russia, which the Kremlin claims was unjustly sanctioned and accused of aggression in Ukraine, decided to help one of its offenders — without hesitation and delay. The second one is an attempt to distract the Russians from the epidemiological and economic, as well as constitutional collapse that is unfolding. And the third task is god old espionage, because when else could Russian “experts” find themselves at a NATO military base?

Meanwhile, only now did it become clear that Italian Prime Minister Giuseppe Conte was more than surprised by Vladimir Putin’s call where he offered help, because it hadn’t even been discussed by the Italian government, which, in fact, considered appealing to the Pentagon. The Italian government actually appealed to the U.S. for help through official military channels, through a request from Italian Defense Minister Lorenzo Guerini to U.S. Defense Secretary Mark Esper.

So what was this all about with Russia then?

The fact is that Italy never requested Kremlin’s help through the official channels. It wasn’t the prime minister who appealed but by a deputy of the Italian Lega Nord party Matteo Salvini. That’s the same party that received campaign financing through the Russian GRU channels and was targeted by an investigation currently underway in Italy, and that’s the same deputy who has widely known for his notorious pro-Russian views.

It is noteworthy Matteo Salvini’s call was supported by a Bundestag deputy with the right-wing “Alternative for Germany” party, Ulrich Oehme. It’s the same Ulrich Oehme, who claimed Russia’s non-involvement in the war in Donbass, met with representatives of the “LPR-DPR” in Minsk, and who has been lobbying for including representatives of pseudo-republics in the Normandy format of Donbas settlement talks.

It was Oehme who became the herald of the Lega Nord. It was him who spun the press release by the founder of the “Putin’s Friends” group in the Italian parliament, Paolo Grimoldi, urging Russia to help Italy.

Thus, visually, the Russian side received a whole heap of appeals from Italian politicians, supported by their German counterparts, which simply could not be left unanswered. But behind this visual screen hides a nasty game of tragedy. The game, also involving Italian politicians from Lega Nord and their Kremlin-indulging friends from Germany’s AfD.

And as the first Il-76 cargo plane took off for Italy, a number of talking heads, already familiar to us, both in Italy and Germany, started talking about the need to lift sanctions off of Russia. And while just a week ago, the pretext for such move was “common fight against coronavirus”, now the argument is the assistance demonstrated by merciful Russians!

In particular, head of the Italian Camere Penali del Diritto Europeo e Internazionale bar association Alexandro Maria Tirelli has come into a spotlight, not only calling for the lifting of Russia sanctions, but also blaming Germany and France for Italy’s own financial losses. The emphasis is being placed in Italian infospace on friendly Russians rushing for help and the insidious, insatiable “burghers” and “frog eaters”.

And therefore, it is possible that, besides those three tasks the Kremlins is solving in Italy, as well as another attempt to recall the need to lift sanctions imposed on Russia, the current epidemiological crisis may become the foundation for the start of a campaign to drive Italy out of the EU, as it was done with the UK. After all, it is precisely on aggression and hostility towards neighbors that the focus is being put in reports and new narratives.