Nord Stream 2 construction requires measures to counter mutation threats in the Baltic Sea. The start of the Nord Stream 2 gas pipeline construction before clearing the Baltic Sea seabed of chemical warfare agents threatens to lead to an irreversible environmental impact and will make impossible the use of the water area for fishing and recreational services. 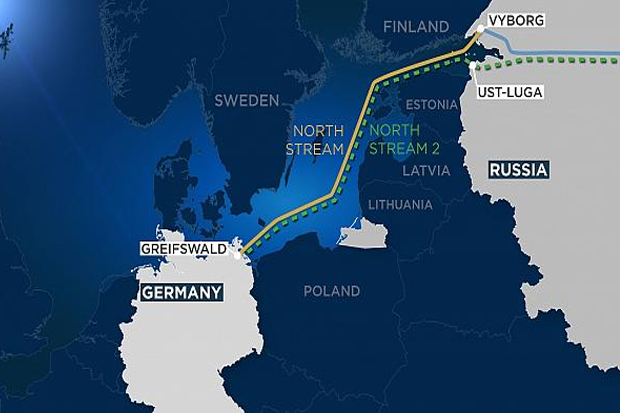 Nord Stream 2 construction requires measures to counter mutation threats in the Baltic Sea. The start of the Nord Stream 2 gas pipeline construction before clearing the Baltic Sea seabed of chemical warfare agents threatens to lead to an irreversible environmental impact and will make impossible the use of the water area for fishing and recreational services.

The Danish Energy Agency has granted Nord Stream 2 AG permission to build part of the Nord Stream 2 gas pipeline on the country’s continental shelf southeast of Bornholm in the Baltic Sea. There are two options for the route: 147km-long and 175km-long.

Since 2007, Russia has attempted to adjust the Nord Stream route to circumvent chemical munitions dumping sites east of Bornholm, but these efforts have faced many complications, including due to the lack of data on the exact locations of dumped munitions. Between 1947 and 1948, the Soviet Union dumped east of the Bornholm Island an arsenal of chemical weapons, left after World War 2, containing warfare agents, in particular, adamsite, diphenylchloroarsine, and mustard gas. The designated dumping area has a radius of three nautical miles at 55o07′ – 55o26′ north latitude and 15o25′-15o55′ east longitude. The disposal was carried out through dumping munitions (aircraft bombs and artillery mines and shells) into the sea. It has been established that part of the arsenal was dumped in cases while ships carrying them were still on their way to the designated area, and part of the wooden cases were drawn by currents and tide beyond the said area, and that’s where they sank. Cases were reported where people would find munitions cases along the coasts of Bornholm and the southern coast of Sweden. Thus, the exact location of the entire arsenal of chemical weapons disposed of in the Baltic Sea remains unknown. In many instances, fishermen found munitions outside the designated dumping site.

In October 2005, the Russian state-owned Vesti Segodnia quoted a document that was found in the archive, dating back to the summer of 1948. It states: “Often due to poor visibility and severe storms, shells with chemical warfare agents are being dumped into the sea beyond the designated areas.” Russian media also cited the officially confirmed data stating that in 1946, four ships carrying 15,000 tonnes of chemical weapons were sunk to the southeast of Bornholm, and also that 8 tonnes of chemical munitions were dumped east of the island.

There is documented evidence that in 1945, some 69,000 tonnes of artillery shells containing an agent called tabun (nerve gas) and phosgene were dumped by Wehrmacht in the area of the so-called Small Belt near Bornholm.

In addition to the specified period, another dumping was carried out in the area in 1959. After manufacturers started using sarin as a component of chemical weapons, mustard- based munitions were withdrawn from operation Almost all stocks of such weapons were also dumped into the Baltic, Kara, Okhotsk, and Barents Seas. The locations of dumping sites remain unknown.

These data are also contained in a report drawn up on the national reports of the Special Working Commission on Chemical Weapons Utilization of the Helsinki Commission (HELCOM CHEMU) in 1994. According to its findings at the time, any operations to pull chemical weapons up from the seabed were dangerous and not feasible, so they must not be carried out. Russian experts at that time shared the same position. In particular, such an opinion was documented in a CDB Rubin chief designer Mykola Nosov’s interview with the Belarussian Business Newspaper (YuDG, No. 13, Jan. 3, 2003).

The 2009 Nord Stream Espoo Report: Key Issue Paper Munitions: Conventional and Chemical states that the only way to clear the seabed of chemical munitions is to detonate them. However, the detonation of chemical munitions will lead to a widening of the contamination zone and the rise of toxic substances into the surface layers of the sea, which will contribute to the pollution and affect marine organisms.

The vast majority of the Baltic Sea bottom is covered with green, black or brown soft gyttja clay. Thus, the detection of dumping sites is complicated by the properties of the seabed. Due to the gas pipeline laying there is a high likelihood of damage to the integrity of munitions or their detonation, which will result in large-scale damage to the Baltic Sea. Also, the detonation of munitions is not excluded after the gas pipeline is launched, due to vibration – that’s if the pipe has been laid over a dumping site.

Despite the fact that detonators had been removed from munitions utilized in the period 1947-1948, there are no data on the lack of detonators on the munitions that had been dumped in 1959.

At the same time, page 48 of the mentioned report states that “[t]hese are munitions that if they detonate may cause structural damage to the pipelines.” The width of the security corridor required is defined as extending 25 meters on either side of each pipeline. At the same time, it was stated on page 49 that 250 chemical mustard gas bombs were found in the Danish section of the pipeline, offset 17 meters from the pipeline route. After that, the authors of the document, for the reasons unknown, narrowed the security corridor to 10 meters. 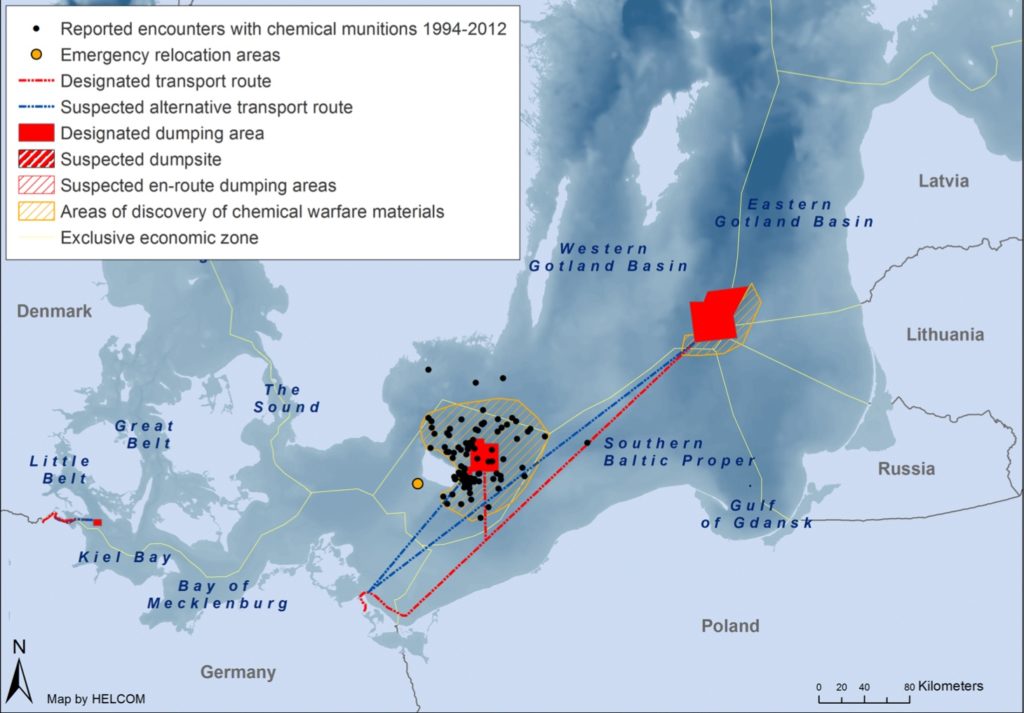 Chemical warfare agents’ hydrolysis products can retain ecotoxic properties. For example, mustard gas is poorly hydrolyzed, able to accumulate, and has a mutagenic effect, being an enzyme poison that has no antidote. According to a piece by Yuri Korobeinikov, Ph.D., published in the “Atomic Strategy” magazine (Ed. 24 of August 2006), in the course of mustard gas hydrolysis, two types of products are formed, one of which is twice and the other is five times more toxic than mustard gas itself .

A strong mutagenic effect was discovered in 1960s by a British geneticist, Charlotte Auerbach. Studies have shown that just one or two molecules of mustard gas penetrating the organism is enough to lead to an emergence in three to four generations of pronounced mental and physical deviations from the norm. The mustard gas hydrolysis products are also mutagens. In the Baltic Sea, there were cases of fishermen catching clots of mustard gas weighing 105 kg. 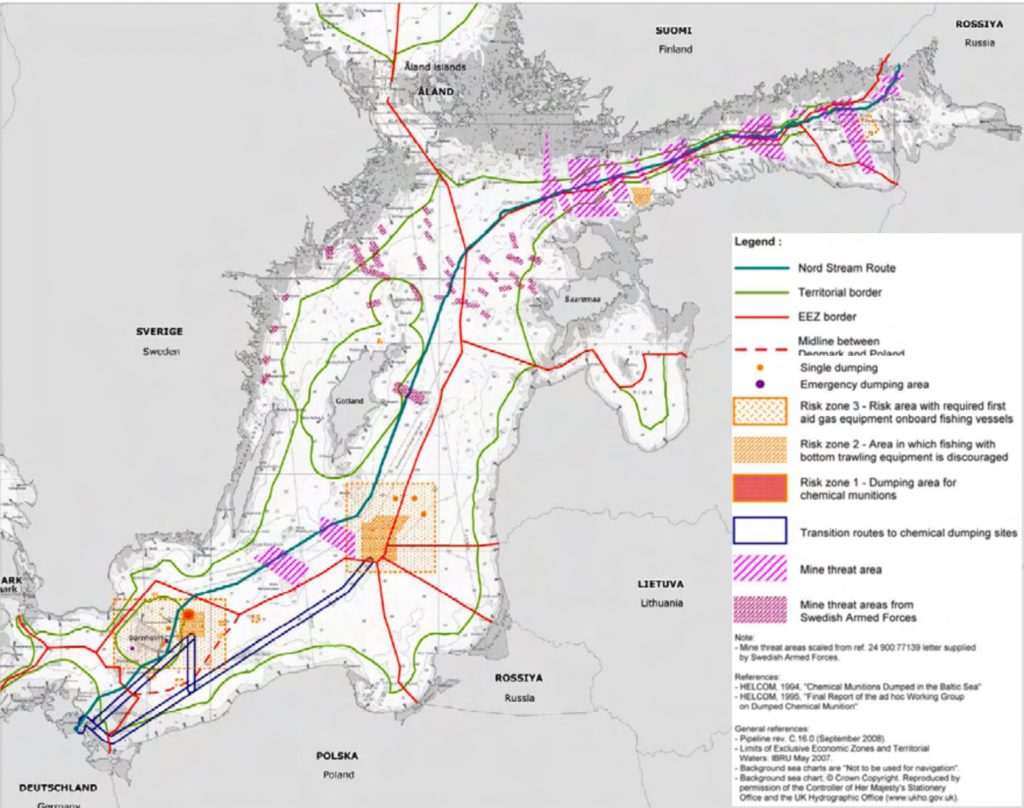 Toxic substances and their decomposition products circulate in the Baltic Sea area, accumulating in marine flora, plankton, and fish. Fish exposed to hazardous substances or products of their decomposition, which is consumed by humans, retains strong toxic and mutagenic properties. Genetic consequences are irreversible (Alexandra Koroleva, biologist, Eco-protection Group, Russia).

On April 13, 2002, the State Duma of the Russian Federation held a parliamentary hearing on the utilization of chemical weapons in the Baltic Sea. The chairman of the parliamentary committee on ecology, Volodymyr Grachev, said at the time that, in connection with the mass dumping of chemical weapons into the Baltic, there was a risk to economic activity, in particular, the laying on the seabed of gas pipelines and deep-sea cables.

Most of munitions have been dumped 70 to 120 meters deep. According to the estimates of Russian experts cited by Alexander Khrolenko of IIA Russia Today, the term of through corrosion of air bombs is under 80 years and artillery munitions – under 150 years. Chemical weapons components were found in Gdansk Bay and 70 miles from Liepaja. The Institute of Oceanology of the Polish Academy of Sciences reported that 8,000 tonnes of chemical munitions had been dumped in the Gotland Basin alone. 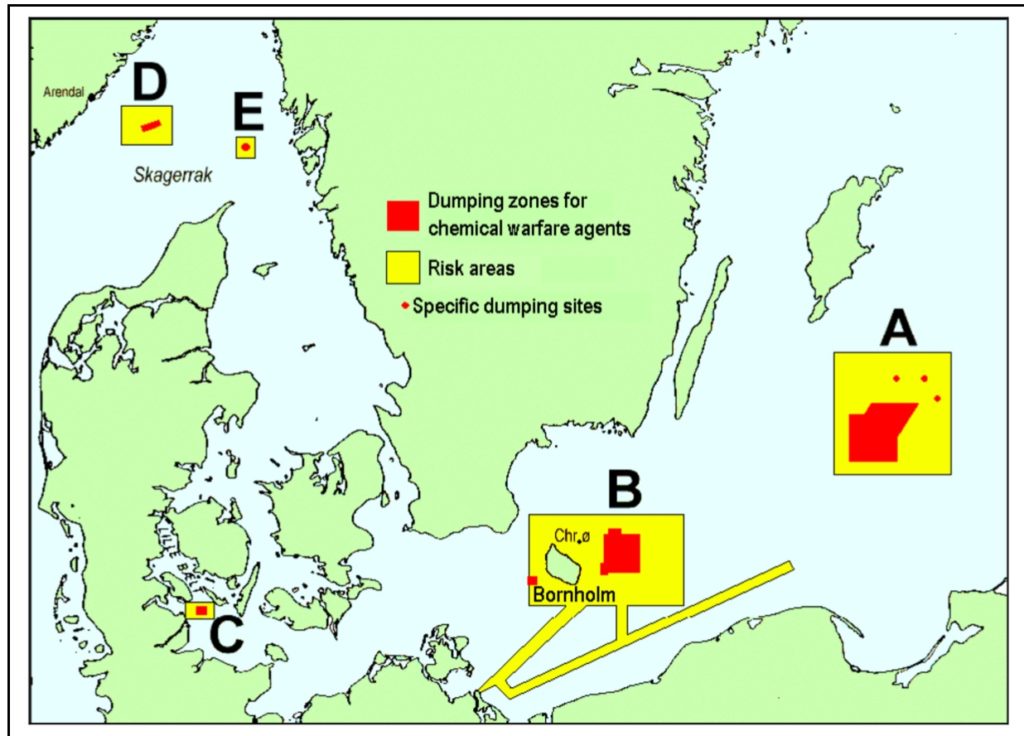 Bornholm and Gotland Basins are traditional fishing locations. Despite the ban on fishing in certain parts of the Baltic Sea, which has been in effect since the 1960s over the dumping of chemical weapons, further deterioration of the integrity of munitions due to corrosion and possible damage through the construction of the pipeline increases the threat to marine fauna and flora. Accordingly, there is a threat to the economy of the Baltic States, Germany, Norway, and Denmark. The underwater currents pattern indicates that chemical weapons components will be carried mainly eastwards, posing a threat to the inhabitants of the Baltic Sea coast. 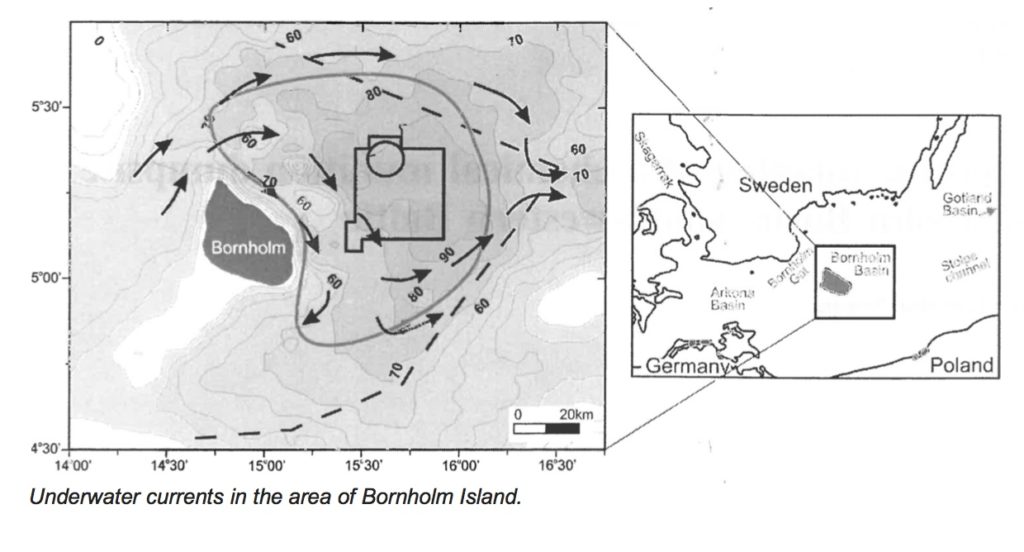