Kiev Russian President Vladimir Putin is now in the 20th year of his reign and shows no signs of leaving the throne. Ever. He served two four-year terms as president from 2000 to 2008 and a single four-year stint as prime minister while a seat-warmer (Dmitry Medvedev) held the president’s office from 2008 to 2012. The former KGB lieutenant colonel then returned to the president’s chair for a “new” first term from 2012 to 2018. He is currently two years into the second of two six-year terms as president that will, in theory anyway, end in 2024. For the uninitiated, the Russian constitution was written in the waning days of the Soviet Union and originally forbad a president from serving more than two consecutive terms—and when the document was first written, those terms were limited to four years. As the end of Putin’s second term approached, there was a palpable sense of panic within the Kremlin ruling apparatus—the overpowering fear that Putin would leave office and the cabal of former KGB officers and other associates around him would lose control over the country. 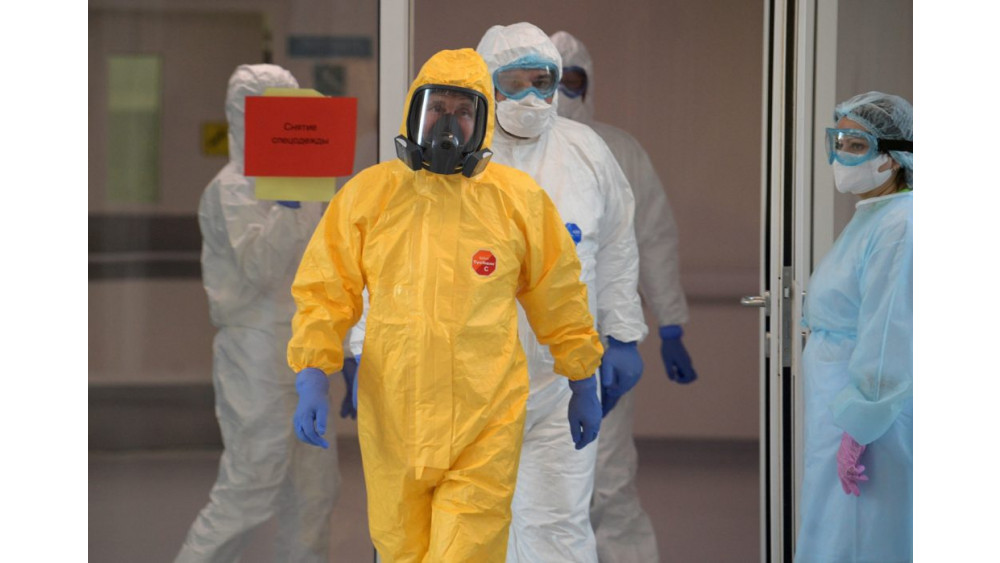 TOPSHOT - Russian President Vladimir Putin wearing protective gear visits a hospital where patients infected with the COVID-19 novel coronavirus are being treated in the settlement of Kommunarka in Moscow on March 24, 2020.
źródło: (Photo by Alexey DRUZHINI(Photo by ALEXEY DRUZHININ/SPUTNIK/AFP via Getty Images

The temporary solution was to have Putin declare that he would support the candidacy of one of his two first deputy prime ministers, Medvedev, to succeed him as president. Medvedev’s single four-year term then opened the door for Putin to serve another two terms beginning in 2012.

As an added bonus for his patron, Medvedev changed the Russian constitution so that the next president would be able to serve two consecutive six-year terms.

But inserting Medvedev into this four-year slot did more than just give Putin the constitutional authority to come back and serve two more (now extended) presidential terms.

Medvedev also made the world safe for Putin’s dictatorship.

Writing in the New York Review of Books in late 2014 Anne Applebaum describes just how effective this misleading veneer of a peaceful and democratic transfer of power—from a mediocre former KGB officer to a buttoned down, St. Petersburg, iPhone-toting lawyer—was for Putin’s long-term goals.

Lest anyone forget, in 2012 it was to Medvedev—not Putin—to whom President Obama made the off-microphone comment that “after my election I will have more flexibility.” At the time, Medvedev was in the waning days of his presidency. He replied to Obama that he would “transmit this information to Vladimir.” Which should have been proof positive to the American president that Putin was still calling the shots in Moscow—even though he did not officially hold the office of president.

That “flexibility” ultimately meant the Obama White House obfuscating its commitment to the deployment of a European and NATO ballistic missile shield that the Kremlin objected to. As Putin’s third term and Obama’s second term overlapped the American president continued to treat Russia with a level of deference that its actions did not merit.

One of the more notable incidents was the invasion of Ukraine’s Crimean peninsula and the eastern Dombas region by a mix of Moscow-backed separatists and Russian “Little Green Men” special forces units. Calls by Ukraine for military assistance in the form of defensive weapons were stonewalled by Obama and his national security advisor, Susan Rice.

Now we are four years from the end of Putin’s fourth term and the Kremlin apparatus is looking for a new way to circumvent the constitutional limitations.

At first the Russian political elites considered a change in the constitution that would permit Putin to hold another two terms. (Of course, no one considers the possibility of him losing an “election.”) But as the pandemic caused chaos across the globe, also the Russian parliament seems to be settling instead on “resetting the term clock to zero.”

The proposed change will allow Putin to stay in office until 2036, when he will be 83 years old. It was put forward by Valentina Tereshkova, whose claim to fame was being the first woman in space. (She was sent into orbit almost six decades ago at age 26 as a PR stunt by Nikita Khrushchev.)

Early on in his rule, Josef Stalin was kept in power by party officials who were petrified of what would happen if he were to be removed following the economic upheavals of the 1920s (which, of course, Stalin caused through collectivisation and other repressive measures). Much the same calculation appears to be in play now with Putin. Like other Russian leaders before him, he has become the “indispensable man” without whom the entire system would collapse.

This strategy—in which Putin creates chaos and fear, and then places himself in the position of being the only person who can guide the ship of state with a steady hand—has worked well for him for more than two decades.

But not so well for Russia.

“Putin can only survive until this game has run its course and the real disasters waiting to happen in Russia cause the system he created to collapse,” this man told me. “He is literally burying the country one shovelful at a time.”