Uprising in history, insurgents in hearts 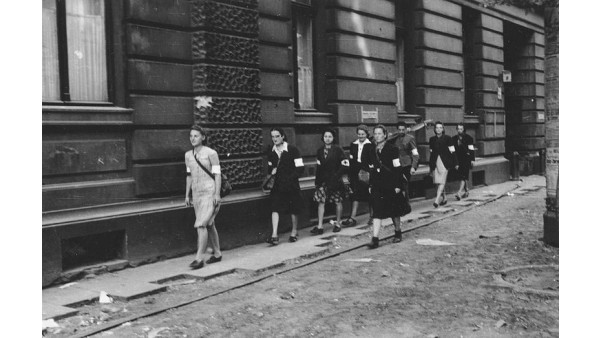 Patrol sanitarny Wojskowej Służby Kobiet na ul. Moniuszki 9
źródło: Wikipedia
My attitude towards the warsaw uprising is very personal. It's all because of my father, who was only ten, when he ran away from home and joined to the insurgents' postal service.

For a few days afterwards my grandmother Bronisława was on the edge of a nervous breakdown. Fortunately they both survived the Uprising; their house was destroyed, but they did not live in it at the time. After the war, my father would show up at Powazki cemetery in Warsaw nearly every 1 August, even if it meant travelling for hundreds of kilometres.

The symbol of love for motherland

The Warsaw Uprising, which broke out 72 years ago, has become a symbol of patriotism and selfless love for motherland. This is why it is not only part of national history, but to some extent also of national mythology. For today’s young Poland the Warsaw insurgents, just as the Doomed Soldiers, stand for the most faithful love of motherland, a motherland for which you can and must sacrifice everything. The way people react to the symbols and anniversaries of the Uprising is moving, especially for someone who – just like me – remembers communist times and the attempts to erase the Uprising from national memory, and to disparage it, and later on, to play down its role and stubbornly divide the insurgents into good soldiers and bad commanders.

My family experience prompts me to mention the suffering of Warsaw’s civilian population, a subject our historians and journalists perhaps not always appreciate the way they should. I remember stories told by people older than me about the tragedy of our family, and also of many other families – for example our neighbours – between 1 August and 2 October 1944.  Last year in the European Parliament, I organized the promotion of Piotr Gursztyn’s book (incidentally, thanks to the good change he later became head of TVP History) entitled “The Slaughter of Wola. An Unpunished Crime,” because I wanted to recall those who did not fight with guns and did not die carrying guns, but nevertheless took up the fight against the German occupier in their own way, by trying to survive, and largely by active co-operation with the clandestine structures of the Underground State. The only reason these people died was becuase they were Poles and Varsovians.

For many years after the Second World War, regretfully also in the Third Republic, the Warsaw insurgents were shot at – metaphorically speaking – by groups that were against Poland’s independence and the empowerment of the Polish nation. This inevitably suppressed discussions about the point of the Uprising; at a time when the idea of our independence was in practice questioned, differing assessments of the Uprising were side-lined and the rationality of armed struggle was defended even by those who in private conversations expressed their doubts. This will probably not last forever. It will be a sign of some kind of normality when we start talking about the Uprising with calm and focusing on the facts, without the suspicion that someone who is fighting the idea of the Uprising, is in fact fighting Poland.

Today even GazetaWyborcza has assumed the role of defending the Warsaw insurgents against the terrible Law and Justice (PiS) government. Memory is short, isn’t it? But I have - as historians usually do - a good memory, and remember perfectly well a campaign orchestrated by the Czerska Street posse to denigrate the Home Army. Years ago, Michał Cichy tried to prove in his article not only that the Home Army was anti-Semitic (!), but even that its soldiers took part in crimes perpetrated on the Jews. Perhaps they do not want to remember it; amnesia is a convenient thing when it serves to clear one’s memory of the wrong that was done to soldiers of the Polish Underground State who are dead, and as such unable to defend themselves. This assault by Gazeta Wyborcza on the biggest and best-organized underground army of Nazi-occupied Europe went down in history as a shameful act of the political and media establishment that inherited from the Polish People’s Republic more than it thinks it did, and more than it would be willing to admit.

In the 1944 Uprising we – as Poland and as Warsaw – suffered terrible losses. They say that Stalin, seeing the determination of Poles and their desperate courage, decided to abandon his plan of making post-war Poland even more dependent on Moscow in political, economic and military terms than what was actually implemented as the Polish People’s Republic. Was it really the case? It’s just speculation. But one thing is certain: the Warsaw Uprising soldiers and the civil population of the capital went down in Polish history as those who made the biggest sacrifice for the motherland while fighting for Polish liberty: the sacrifice of life. They did it perhaps because these generations of the Second Republic breathed patriotism – not cosmopolitanism – at school. Every day, members of this generation – years before John F. Kennedy’s famous words – would ask themselves not what they could get from their country, but what they could give to it. This has earned them a prominent place not only in the history of our nation, but also in my heart, in our hearts. It was a beautiful generation in the sequence of Polish generations that make up our national commonwealth.

Honour and glory to the Heroes!

, who was only ten when he run away